Serendipity is a magical word – and it also summarizes how our Association got started. Fortunate chance encounters between good people ignited an initiative that today is making a real change.

It all started in 2002 with Ruth Tal*, a benefactor in Jerusalem without any money but with endless energy to help needy families. Many called her an angel. Simon Schoenmann, a businessman, used to go to Jerusalem twice a year and help Ruth as much as he could. She was the one who told him ”I’ve many donors here. Why not go to Yerucham and take care of their needs – nobody is helping them.”

Yerucham at that time (8,700 residents in the Negev) was chaotic – politically, socially and educationally. Most of the public offices had closed down and many people had been fired from their jobs. The Municipality had inconsistencies in its bookkeeping and as a result most of the large contributors withdrew their financial help. Due to all these problems many excellent people left town.

In August, two weeks before the start of the school year, I was driving with Simon to Sde Boker, a small town south of Yerucham, when he told me the story and asked if I was ready to help. Both of us agreed that schools were the place to begin and so we detoured to Yerucham.

On the way, I picked up the mobile and asked the operator for the numbers of schools there. At the third school, the Principal Yona Knino said she could meet us right away.

Until she found out that we were two private people from the center of Israel wanting to help, she didn’t want to share the very bad situation with us. Then she started crying. Just a day before she’d attending the funeral of one of the children’s fathers.

She’d asked him to contribute 100 shekels towards School costs. She didn’t know that his small carpentry business was bankrupt. He was so upset at not being able to pay toward his child’s education that he went home and killed himself. A day later we turned up. As a religious woman, Yona felt there had been some divine intervention.

We were shocked to hear that children wouldn’t come to school because they didn’t have a sandwich or gym shoes (long before the government started to help in the town with a nourishment project). We decided to act.

When school started two weeks later, each class had a big basket with sandwiches for all the children to avoid unpleasant feelings. In October, on my birthday, I had a party to which I invited everyone I know (about 100). I told them I’m accepting donations for Yerucham instead of personal gifts, such as shoes size 32 for girls, 35 for boys, books, art supplies and so on.

Along the way a true philanthropist from the USA heard about our work and offer to help, provided that his donation was channeled directly to its target. He gave us a generous amount every month, to be shared with families in temporary difficulties without outside assistance. We knew that the money had to be used in supportive ways, not as handouts. Like buying fishing rods for people rather than handing out fish.

We began to return unemployed citizens to jobs that helped the community the most. In the first year 36 citizens returned to work and in turn worked with 600 children. In this way we helped the individual families and the whole system in Yerucham began to function again (see Debbie’s letter).

Since then we’ve managed to set up partnerships with various concerns who join us in helping the community stand on its feet again.

* After the first visit to Yerucham, Simon didn’t have the chance to tell Ruth Tal about his visit. That week her son got married and she asked everybody to let her rest since she was very tired. Aged just 51, she went to sleep and never woke again. When we heard, we decided that if we opened an Association it would be in her honor. Blessed be her memory. 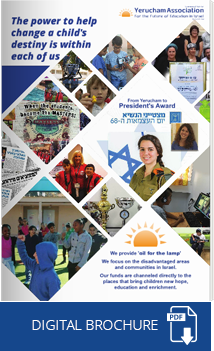